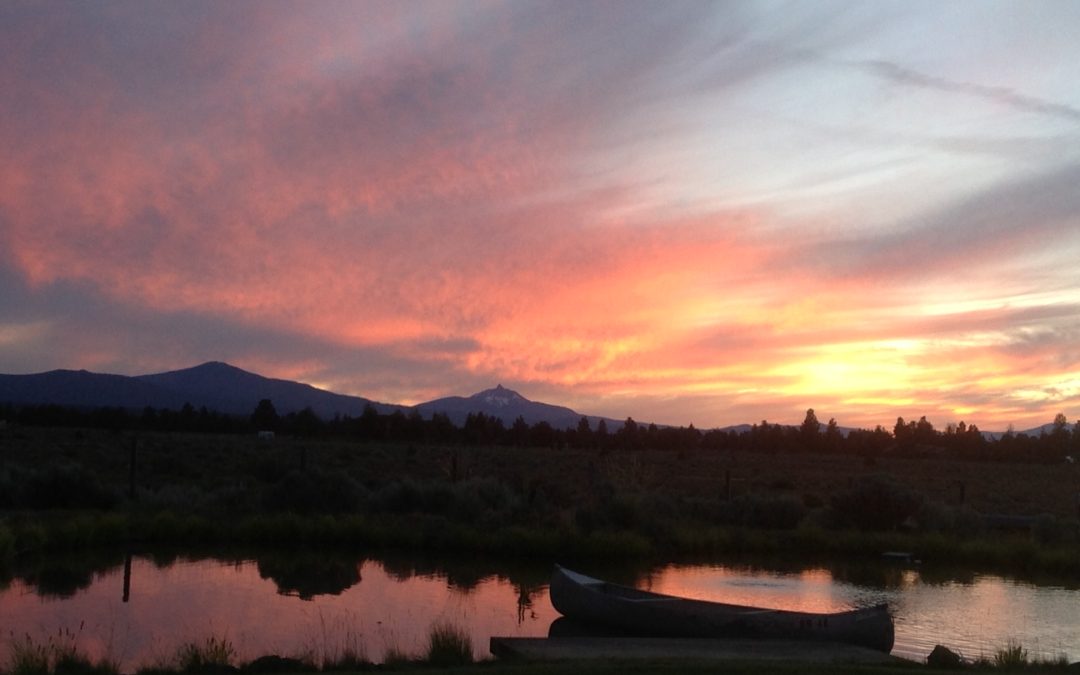 Gary was heading south for his monthly visit to his mother in Sacramento.

When Gary leaves, I’m alone. He’s my best friend and protector. We’ve lived in the same house for 25 years. In our first decade, he left for weeks at a time to fly C-141 transport planes for the Air Force. He was the flight engineer and flight examiner for large, four-engine cargo transport jets. I worried about him and prayed for his safe return. I also worried about myself.

I was OK during the day, but at night, I lived in a horror movie. Scenes of being jumped from behind and our daughter being kidnapped played out in grim detail. Sinister people waited in the shadows for me to fall sleep; when I did, my body behaved like I was under attack. I would startle awake, heart thumping and sure a person was standing in the doorway.

I woke up screaming. A dark, looming shape, or innocuous old woman, would be standing or hovering at the end of my bed. It didn’t matter if the being was evil or harmless. My mind automatically chose anxiety-ridden outbursts.

By the time Gary got home, I was sick and exhausted from lack of sleep. It took several days to recover and deal rationally with life’s challenges. My temper flashed in situations that didn’t warrant such strong reactions. I resented Gary for leaving me. I knew being tormented by terror wasn’t his fault, but I took it out on him anyway.

Evading threats was part of daily life, and I didn’t understand why. The old man pulling into a parking space next to me, a car coming slowly down our driveway, or a man following too close as I drove home with our daughter all fired up my blood pressure and hypervigilance. Potential predators had my mind creating scenarios that required fighting for my life. I didn’t understand the overreactions and irrational thoughts. I’d learned to accept them as normal.

At an early age, I believed the terrifying thoughts were true. I was under siege. There was a war happening in our outwardly idyllic family home. No one knew but me. I carried weapons when I was alone, especially at night. My short fingers couldn’t reach around the wooden handle of a long kitchen knife I carried tight-fisted through the house.

In the last decade, I began exploring why I wake up screaming at night and feel under attack. Therapy, self-help books, talking to friends and family, and journaling have all helped. But nothing worked as well as writing a memoir about childhood experiences. Working well doesn’t mean it was easy or without overwhelming challenges and reactions. I was going back into the hardest parts of my childhood and reliving them in painful detail. Once I began excavating, more memories were exposed. Reviewing the past had its downside, including more terrifying sleep terrors.

As I understood my reactions to irrational thoughts, I gained distance and elevation. I saw my automatic reactions to fictional ideas transform into opportunities to understand and identify responses in a more clinical way.

I wanted my memoir to be helpful — for me; and hopefully others with their own tangled childhood trauma. I pitched my book to an editor at a writer’s conference and received negative feedback. I was in shock as I drove home from Portland. What had the last three years been for? Her comments cut deep, and I believed them. If I reworked the book, I was afraid it would lose its original intent.

I decided to focus on other projects. I work for TRACEs (Trauma, Resilience, Adverse Childhood Experiences) as their story-sharing writer. The work has taught me about resilience and that no matter how old you are, or how long ago you were traumatized, there’s hope. You can release yourself from fear, anxiety, anger and confusing thoughts. I’ve interviewed inspiring people who’ve overcome adversity or are helping others to achieve resiliency. Surrounding myself with people who’ve chosen healing and understanding over victimhood has changed me. There’s a space inside that used to hold fear. Now it’s slowly draining away.

I never expected healing could result in feeling empty. Once I recognized what was happening, I was curious about how I could fill that empty place. I chose to fill the emptiness with faith in my Higher Power, myself and other people.

Recently, I read an essay in Poets and Writers magazine. In it, a writer talked about hearing that his book was no good and he should start something else. Like me, the words devastated him. After he recovered from the rejection, he thought of a subtle change he could make in his book that would send it down another path, and hopefully to his desired destination. The negative words he heard and absorbed were no longer a barrier to his goals. Instead they revealed a turn. I read those words and cried. Maybe there was hope for my book?

Reading his words of resilience, I saw the connection to overcoming trauma. The initial event was a shock. Time needed to pass to process what happened. Then there was an opportunity to turn and go in a new direction. Challenges weren’t things to be buried, but chances to regroup, grow and harness adversity to fuel something good.

I’m feeling lighter, safer and more optimistic — not all the time, but more often than before. It’s a journey, and a progression requiring time and self-reflection. It takes saying I’m sorry to the ones I hurt and accepting the apologies of those who harmed me. Hopefully, we’ll part wiser and at peace. That’s what I’m working to achieve, no matter how wrinkly I get, or crackly in the knees. It’s the path I’m meant to follow.